This is in response to the numerous requests I get to pick up the phone, e-mail, write, send a pigeon or whatever to blacklisted schools. Well it's not exactly an even playing field out there and I've better things to do than fight some corporate monster, armed with a huge legal war chest to bully and threaten anyone who dares speak out against them.

The case below was described as David versus Goliath and was considered a PR disaster for the corporation concerned, as the judge decided that McDonald's had "pretended to a positive nutritional benefit which their food did not match"; had exploited children in its advertising, and paid low wages, "helping to depress wages in the catering trade".

McDonald's spent over £10 million for nothing in their petty battle against two penniless people. Yes that's right, £10 million just for the pleasure of shooting themselves in the foot!

Some of the people, who send The Inspector abusive messages would do well to listen to the wisdom of Voltaire who said:

"I disapprove of what you say, but I will defend to the death your right to say it." 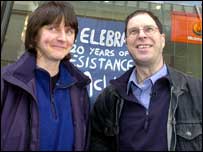 Steel and Morris on Tuesday -
15 years after being served a libel writ by McDonald's
The European court ruling that two activists should have been allowed legal aid in their libel battle with McDonald's is just the latest of many twists in the longest case in English legal history.

The case goes back to the mid 1980s and a public campaign attacking aspects of the fast food industry.

In 1986 the London Greenpeace group - separate from the international Greenpeace movement and including Helen Steel and David Morris - produced leaflets attacking McDonald's.

The leaflet, called 'What's wrong with McDonalds - everything they don't want you to know', did not hold back.

Among other things, it accused the corporation of encouraging litter, mistreating animals and workers and destroying rain forests.

In 1990 McDonald's served libel writs on five volunteers in the group, beginning a battle often compared to that of David - and Helen - against Goliath.

It demanded that they retract the claims in it and apologise - or go to court and prove that all the allegations were true.

At the time, McDonald's economic power outstripped that of many small countries, with worldwide sales of about $30bn in 1995.

Three of the activists decided that, with no legal aid, they could not fight the massive corporation. They backed down and apologised.

Ms Steele was a part-time bar-worker earning a maximum of £65 a week, and Mr Morris was an unemployed postman who was responsible for the day-to-day care of his son, then aged four.

The inequality of arms, as the European court noted, "could not have been greater".

As they had no legal aid and not much money of their own, Ms Steel and Mr Morris had to fight the case with only occasional unpaid help from lawyers - mounting their own defence and own representation.

McDonald's, on the other hand, was represented by leading and junior counsel, experienced in libel law, and by one or two solicitors and other assistants. The corporation's legal bills were estimated at £10m.

Steel and Morris raised an estimated £40,000 from public donations to pay for witness airfares, court costs, expenses and so on.

Transcripts of the trial ran to about 20,000 pages and about 130 witnesses gave oral evidence
In 1991 they made their first attempt to demand legal aid in the European Court of Human Rights. But the court ruled that, as the defendants had already put up a "tenacious defence", they could not say they were being denied access to justice.

Further legal wrangling took another three years, and on 28 June 1994 the full libel trial finally started in the High Court in London.

Transcripts of the trial ran to approximately 20,000 pages; there were about 40,000 pages of documentary evidence.

Some 130 witnesses gave oral evidence - 59 for the defendants, 71 for McDonald's. Ms Steel gave evidence in person but Mr Morris chose not to.

On 13 March 1995 McLibel became the longest ever British libel trial. 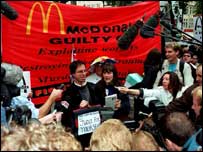 David Morris and Helen Steel outside court in 1997

On 11 December 1995 it became the longest civil case (as opposed to criminal) in British history.

On 1 November 1996, it became the longest trial of any kind in English history.

And it wasn't until 19 June 1997 that the judge, Mr Justice Bell, delivered his 762 page judgment. The judge rejected claims that McDonald's was to blame for starvation in the Third World or had used lethal poisons to destroy vast areas of Central American rainforest.

But he also decided, in what was seen as a PR disaster for the corporation, that McDonald's had "pretended to a positive nutritional benefit which their food did not match"; had exploited children in its advertising, and paid low wages, "helping to depress wages in the catering trade".

McDonald's says both it and the world have moved on since the case
He ordered Mr Morris and Ms Steel to pay £60,000 damages, reduced later on appeal to £40,000.

McDonald's has not sought to collect this money, and the two have vowed not to pay.

But the case did not end there. Two months after the verdict, Ms Steel and Mr Morris lodged an appeal.

This ran from January to March 1999 - and it didn't end there either. In July 1999 they pair asked the House of Lords for leave to appeal further - which was rejected.

So in September 2004 they launched an action against the UK Government at the European Court of Human Rights in Strasbourg, this time saying the lack of access to legal aid breached their rights to a fair trial as guaranteed under article 6 of the Human Rights Convention.

On Tuesday, the court agreed. The British government has three months to appeal the decision.

But it is possible the UK libel laws may have to change.

The government says it is considering the judgment, but recent changes in the law mean that legal aid is now sometimes available in exceptional cases.

McDonald's made little comment, except to point out that the allegations made by Steel and Morris related to practices in the 1980s.

FOR THE MOST RECENT POSTING CLICK HERE
FOR BLACKLIST NOMINATIONS CLICK HERE
Posted by Inspector Mchammered of the Lard at 4/18/2007 01:26:00 am