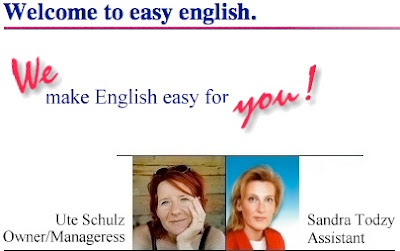 "This is definitely one for Inspector McHammered to check out, I reckon!"
So says the infamous Sandy McManus.

The whole issue of "self-employed" versus "employed" status for teachers is a veritable can of worms. The employer pays much less (if not zero) payroll taxes and doesn't have to bother about such beasties as pay slips, employee rights etc, while if they are not careful the teacher will be left dealing with a ton of bureaucracy and hefty tax bills. In practice the "free"element of "free"lance is usually pretty much non-existent with the teacher being expected to teach classes on request from a sole employer.

The basic definition for being an employee is whether you are under the supervision of someone else who dictates the time place and content of what you teach. Clearly most teachers fall into that category and are not self-employed. If however they are genuinely freelance and working for a number of different schools, say doing in-company training and are in total control of the pedagogical side of things then a good case could be made that they are self-employed.

The "self-employed" racket has been stamped out in most European countries and Germany was until recently one of the few remaining countries where such practices were rife. The taxation exemption for EFL teachers in Germany has also been subjected to a clampdown and was reported a while back in the EL Gazette.

This is the posting that Sandy has put on his blog. I've chopped out quite a lot of bits that are emotive rants against the owner and just concentrated on the meaty stuff. The freelancer/employee factor comes over loud and clear. I suspect that one reason the owner wanted the teacher to phone the clients herself is because the teacher could then be proven to have dealt directly herself with the client in terms of organizing the time and place of the class (i.e freelance):

"I have had serious trouble with a school in Essen, Nordrhein Westfalen, named Easy-English

Complaints are/were: Confirming by email prior to moving to Germany that no tax or pension/social payments need to be paid to the German government for 2 years (contracted duration)

· 250 euros per month must be paid to the German pension fund, and tax must be paid to – totalling about 40% of wage, hence my departure from Germany , she encouraged illegal teachers so that she could pay low wages. Boss lied continually about tax and insurance until I hired a financial advisor, which I passed onto her, and she denied all knowledge.

FIRED: Fired for cancelling 4 lessons per week when my status is freelancer, 3 months prior to the natural end of my contact.

INSURANCE: Forced into a medical insurance contract with her husband for 300 euros per month, was not advised about the contract being bound to 2 years. She took advantage of my lack of German skills, which resulted in a bitter fight with her and her husband, the insurance company and me. After 3 months I won the right to cancel the contract.

RECRUITMENT: Job posting information are misleading and should clearly define what is involved with being a freelance teacher at easy English (tax, pension, health insurance, etc.).

LATE ARRIVAL PENALTY: If teachers arrive up to 15 minutes late for a class, they are charged for the entire 45 minute lesson, which the student still pays for as well as the teacher to the boss. Double bonus for her.

"I would like to nominate UKLA Academy in Bursa, Turkey. I had a position/contract with them that was to include a 200USD reimbursement for flight. About 24 hours before my flight departed, I received an email stating that my position was CANCELLED! The school then also refused to reimburse any part of my flight. Needless to say, I also lost time and wages since I had to start looking for another job all over again."

Possibly there's a good reason why the contract was pulled and nothing reimbursed. Such things as a bad reference or something unknown that happened between the school and the teacher after the job was offered, who knows.

Whatever it's certainly something that teachers should look out for and guard against with any job. UKLA Academy Bursa, Turkey do advertise a fair bit for teachers. One of their ads reads as follows and as you can see definitely states travel reimbursement:
Requirements:

so I'd just advise you to be careful.